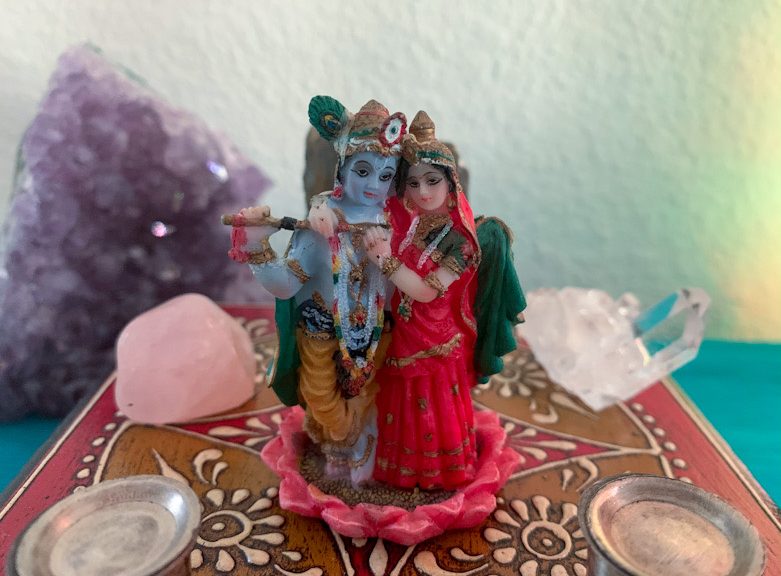 This is the story of how The Morrígan threw a book at me. This is when my spiritual awakening really began. I share these stories in the hopes that it will make someone else feel less lonely, less crazy, and stronger in the face of their own struggles.

The Morrígan Threw a Book at Me

I was a fed-up grad student. I was done with ALL OF IT. Relationships, school, work, roommates, family— everything.

What was I doing here? This isn’t what I’m meant to be doing, I thought. There must be a reason for all of this madness.

I sat in front of my little Wiccan altar on my bedside table. My grey cat, Selkie, curled up in my lap. On the altar was a hand-drawn outline of the Goddess and God. It almost looked like the chalk outlines of a crime scene, and the crime scene was my heart. Where their faces should be were question marks. I knew they existed, and I knew I had a personal relationship with them. I’d always known. But I didn’t know who they were, and I needed to. What were their names? If I knew that, then the rest of the train wreck that was my life would at least have some meaning, and I could handle it.

Selkie purred a calming rhythm that helped put me in the meditative state I needed. I went to the one person I felt like I knew I could rely on. She’d always been there for me.

“Morrigan, are you there? I need your help.”

“I need to know who They are. Are you my Goddess?”

She laughed at me. No, I definitely am not.

“Why is that funny?”

You do not relate to me as a deity. Ours is a different connection. But I do know who your Goddess and God are. I can help you find them.

You will have to look in a different direction. You will not find what you’re seeking in Ireland past or present, but in time, it will come back around. This won’t make sense until later. Just trust, and be patient.

Several months later, I had finished my degree in Irish Studies. I was exhausted, over-caffeinated, broke, and my heart had been pulverized by everything. I was frustrated with my degree. I hadn’t found what I was seeking, even though it felt like it was staring me in the face. I couldn’t see it. But, I was standing in a used bookstore, so everything was going to be ok.

I was so excited to buy a book and read it and not have to write a paper about it! What was I going to read? Like a kid in a candy store, I was overwhelmed by options. I took a lap around the store. I walked by the first bookshelf, and a large book jumped off the shelf at me, and I somehow caught it.

How did that happen? I examined the shelf it was on. The bookshelf had a solid back and was up against a cinder-block wall. It was a large, stable shelf. I tried to push it to see if it would wobble. Nothing. My former-scientist mind was trying to find any reason why this book had flown off the shelf at me as if pushed from behind and could find no logical explanation. I looked at the book. Bhagavad-Gita. “Hey, wait,” I thought. “I remember hearing about this from that world religions class I took in undergrad. I’d put it on my ‘to read’ list.” There was a blue man driving a glorious chariot on the cover. Ok, this could be interesting. I’d wanted to know more about the Vedas anyway. But, what if there was something else to read? I only had enough tip money from my barista job for one book. And I kind of wanted something fluffy.

I put the book back on the shelf to think about it. I had to wedge it back in the space. Nope, it didn’t just slip out and fall. It was in there. Something forced it out before. I walked around the store for a while, daydreaming. I kept finding myself back at the first bookshelf. I’d go off again, picking up books in my favorite genre— sci-fi, and fantasy. But every time I’d pick something up, it felt like something was pushing my hand back down. I kept being pulled back to the first book.

In a daze, I walked past the shelf again for the fourth time, and the same book came flying out of the bookshelf, knocked me in the side of the head, and fell into my arms, which somehow were held up to catch it despite my shock.

Was it not clear the first time? This one.

I got the distinct sense that there was a raised eyebrow accompanying her question, although there was no judgment or snarkiness. Just confusion as to why I wasn’t “getting it.”

A little embarrassed at my slowness in realizing that clearly, something important was going on here, and The Morrígan had to knock me in the head— literally— to figure it out, I took the book to the register.

It took a while for me to read the Bhagavad-Gita. I started reading it, knew that it was important, and put it down for a few weeks until I felt I was ready to continue. When I picked it up again, I had met somebody who knew the book and was happy to talk to me about it. (This person would end up becoming my husband!)

I’ll never forget the moment it happened. I was sitting on my bed with Selkie purring next to me, reading the book. I hadn’t been able to put it down for hours. Something hit me in the center of my chest, and then slowly started to expand until it had completely taken over me. I heard this sound like the moment you dive underwater and the rush of the ripping water shrieks across your body. Radha and Krishna. I knew them! I looked at the outline-deity drawing on my altar and then closed my eyes. I had found my deities! My soul’s eternal relationship with the Goddess and God was with their forms as Radha and Krishna.

Silently, I thanked The Morrígan.

The Morrígan took a step back after that. She was still in my life, but she gave me space to develop my relationship with Radha and Krishna. This took me all over the world, and through a massive spiritual transformation that spilled over into every aspect of my life. I had everything stripped from me so that I could start to rebuild. But I wasn’t alone. I had a real spiritual ally at my side, and I felt like my life had meaning.

Four years later, The Morrígan came back with an insistence that was stronger than ever before. She was about to show me how my devotion would bring me back to Ireland and the Sídhe. But, that’s another story. And another bookstore!

The story continues in Heretics and Ravens: The Morrígan Returns. Read the first story in this series, “Awakening” From Dreams.