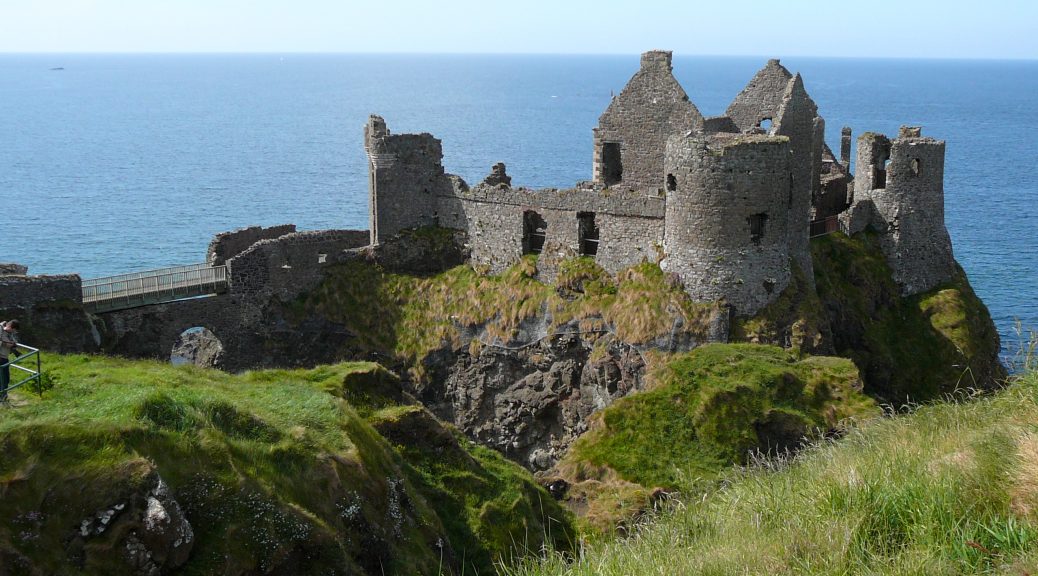 I was 12 or 13 when my world flipped inside-out. I still wasn’t “Awake.” That would take many more years. But this is when I’d start to get clues of who I really am, beyond this body I inhabit. I said in a previous post that this blog was about to get personal. Here goes…

It started with the Dreams. I’ve always been a vivid dreamer and would constantly dream of things that were yet to happen. But these dreams weren’t about the future. They were different. These were also recurring.

In one, I was flying very fast. It felt like an out of body experience. I would fly up a green hill— a green of an intensity I’d never seen before— and over the top of a ruined castle that was built at the edge of a cliff. Part of it had fallen into the ocean. In the dream, I would soar up the green hill, over the top of the castle ruin, down the cliff face, and level off over the water before I would awaken in a blinding flash of light. I’d bolt upright in bed, gasping for breath. I had this dream three times and it was always the same. I was 13 at the time, and I’d never seen this place before.

About a year later, I was in a Barnes and Noble with my best friend. On the “Bargain Books” table, there was a large coffee-table book of castles. Of course, I went over to it and picked it up. I opened it to a random page in the middle….

… And then I dropped the book on the floor in shock. As it fell to the ground, I felt the axis of my world flip over.

There, staring back at me from the floor at my feet, was the castle in my dreams. Castle Dunluce, in County Antrim, Ireland, said the caption under the photo.

I knew I had Irish ancestors, like millions of other Americans, and I knew about leprechauns, but that was the extent of my Irish knowledge. That day in the bookstore marked the beginning of me reading everything about Ireland and the faeries that I could get my hands on. This wasn’t just about my past anymore, this was about my now.

Later I’d notice that bookstores seemed to be a recurring theme for spiritual transformation for me. That’s a different story.

The Battle for Sleep

The second recurring dream was very different. In the first, with the castle, I had no sense of a body. I was just flying. In the second one, I had a body, but it wasn’t the one I was wearing in this life. I was taller, and much slimmer, with long black hair. I was wearing a long, dark dress or a robe and I held something long and skinny in my hands. A spear? A staff? Was I a wizard? I was standing on top of a large boulder, barefoot, and people were moving around en masse on the ground below me, just beneath my feet. They were fighting, screaming, and shouting. This was a war. I was standing over a battle. I raised my hands and chanted something in a language I’d never heard before, and behind me formed a terrifying storm cloud of black and red. Then lightning, and red rain—

And I’d wake up sweating and spinning in confusion. Who was that, what was that language, what was happening? Was I crazy? This was just a dream, right?

But it never felt like any of my other dreams. It felt like I could touch it. Like I had touched it. I could still smell the air. And the sounds of battle were still ringing in my ears.

Not Just a Dream Anymore

A while later, I was watching a movie that had some Irish in it. I couldn’t understand what they were saying, but one word jumped out at me as if it was shouted directly into my brain. “Uisce.” I knew that word! That was part of the chant in that dream! It was the Irish word for water. I wasn’t dreaming in a made-up language, I was dreaming in Irish! How the #*$% did I know Irish?!

Suddenly, I felt a wave of relief. I wasn’t crazy, I was reincarnated. Those weren’t dreams, they were memories. I felt that I had a past life connection that I was beginning to tune into. Instinctively, I knew to look to ancient Ireland. It was hard to find any sources in my area. Somehow, I found some retellings of some of the mythology and folklore. There were stories of the Tuatha Dé Dannan, and I KNEW I’d discovered something.

All the sources I found warned against being “faerie-led” and described the Sídhe as inherently dangerous. Something inside me screamed you’re wrong! every time I read that. I would get so frustrated with some of the mythology. That’s now how it happened! that voice in my head would yell. But, I didn’t know why I was so sure.

The dreams became more frequent and intense, and I’d have glimpses of places and people that seemed all too familiar to me but had no place in my life. I would be in class or conversation and then suddenly “drift off.” Adults started to notice that I wasn’t fully “there.” They’d look at me with fear and worry when I’d return from one of my “daydreams” and be shocked to find myself in a classroom, or when I would warn of something that was about to happen just a minute or two before it would. Or when I’d answer a question out loud that nobody heard anyone ask. Or when every time I’d enter a room, a lightbulb would explode. Things were getting weirder and I was drawing unwanted attention to myself. Then, when I was 15, I got a visit.

I sat on my bedroom floor, studying biology. Two tall beings, a man and a woman, appeared standing next to each other in my room. They glowed faintly. I was not afraid. I knew they were there to help me, and I felt deeply connected to them. The woman, who looked similar to the one in my dream, explained that my abilities were developing too quickly, and it was putting me in danger. The man, with long, dark hair and piercing but kind blue eyes, said that some of my abilities were going to be blocked temporarily. He told me not to worry, that they were protecting me and when the time came when I would need those abilities, I would have full access to them. They told me I wasn’t alone, and in time I would understand.

I felt utterly peaceful and calm in their presence. I knew I could trust them. I said, “ok,” and they faded before my eyes. Every now and then, I’d think about them and wonder when “that time” would come. It would be more than 20 years before I would learn who they were.

Read the second story in the series, How The Morrígan Threw a Book at Me.