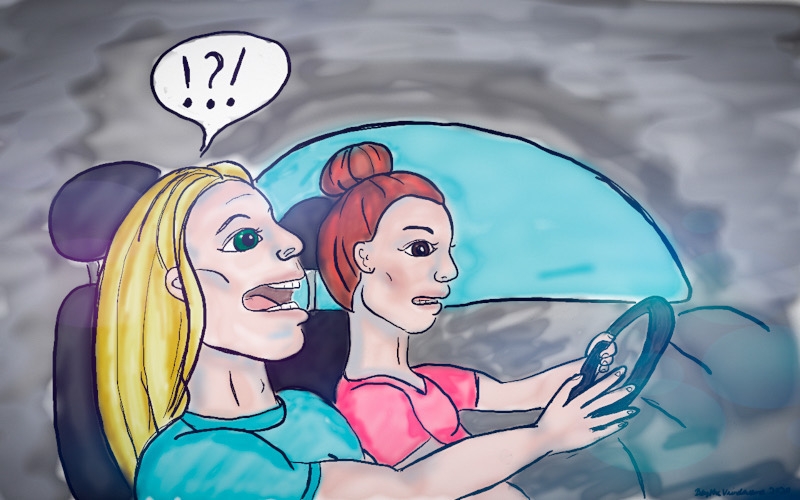 My battle sister told me I had to write a post about this. So, hopefully, my experience will be of benefit to more than just me. Basically, I think Coronavirus cured my road rage!

I Have Road Rage

I’m not proud of this. But the first step to solving a problem is admitting you have one, right? Like all who have road rage, I believe myself to be a good driver. No, an excellent driver.

In reality, I’m a skilled, fast, and decisive (some would say aggressive) driver. I see being able to quickly get out of the way as a defensive driving technique. I’m more than competent. I learned to drive on a Grand Prix track in an actual race car. I would be an excellent driver if you were in a Mission Impossible-style car chase or Fast and Furious sequel. But when I’m just going to the grocery store in my station wagon, I do not need to be driving like I’m on a track surrounded by other highly skilled and hyper-aware drivers like myself. I’m surrounded by timid or completely unaware drivers, and it stresses me out.

Speed Bump in my Growth

Over the last several years, I’ve made significant changes in my life that have made me a more mellow, easygoing, and forgiving person. I don’t take things personally, I can forgive and let go. I can laugh at mistakes without being overly critical.

But, my chill is roadkill when it comes to driving. And as the rest of my life has improved, it’s made this area stand out in stark contrast. I get irritated and angry at everything when I drive. I don’t run people off the road, or slam a brake check or anything. Instead, I internalize it— cursing like a sailor behind my tinted windows, shoulders tense, feeling threatened and angry and in “fight” mode.

When I drive, I take things personally. Why? This is literally the last place to take anything personally! Everyone is in their own car bubble, indifferent and oblivious to the world beyond their windshield. Nobody is thinking about me or anything else. They’re just honey badgers behind the wheel. And I think that’s what does it. There’s a level of impersonalism and obliviousness to the needs, safety, and existence of others that deeply offends me when I come across it. And when I drive, I come across it every mile.

One day, I was coming to a scary merge turn where cars from the other side never, ever yield. I accelerated to get in front of someone who was definitely not looking and was not about to slow down, and nearly got run off the road.

WHY DID YOU DO THAT?

Uh-oh. I’ve never heard Tadhg upset like that, and it was directed at me.

Nobody likes to be called out. My husband has called me out before, and it sucks when you’re called out by someone you love, but when that person is also a non-corporeal Sídhe being who you know only ever has your best interest at heart and would do anything to keep you safe, it’s extra bad.

That was so dangerous and unnecessary. You could have just slowed down. Please, don’t make me watch you die like that!

I felt terrible. My heart dropped out of my butt as I immediately realized my selfishness. My Badass Driver Ego evaporated and I felt like I was the size of a very small bug. I pulled over to apologize and get my energy straight.

Even when Tadhg is upset with me, I hear nothing but love in his voice. I had scared him and unnecessarily put him in a position where there was nothing he could do but watch me take a stupid risk with no worthwhile outcome. I also thought I was alone in the car with my thoughts. I wouldn’t have driven like that if there was someone else in the car! This made me realize that even if I am alone, my actions still affect others. Not just Tadhg, but my husband would be so upset if I got in an accident! And why would I drive differently if it’s just me in the car? I began to take my stress levels when I drive much more seriously so I wasn’t making bad decisions out of annoyance or anger.

I got better. A lot better. I was able to stay in the moment more often and not let my emotions control me. But I was still getting scared, stressed, and angry more than was necessary, and I didn’t know why. What’s driving this?

Road Rage in the Time of Coronavirus

It’s now April 2020, and the whole world is under a Shelter in Place order because of the Coronavirus pandemic. I can only go out for necessary errands, like buying food. The world has shut down.

I have to get food. There is no one on the road except me. It’s eerie to see the roads so empty in the middle of the day! My neighborhood is a ghost town. I come up to an intersection that always makes me nervous. Right away, I notice the anger and fight reaction jump up into my tensed shoulders.

Wait, why am I feeling the Road Rage? I’m the only person on the road! There’s no one here to piss me off! It’s just me… OMG IT’S ME!

Do you see what’s going on? I hear from my trusted co-pilot sitting shotgun.

That’s when I understand that I am my own problem. It took coronavirus to shut down the world and put me in this position for me to realize that I’m bringing my own expectations of fear and stress into a situation where it isn’t necessary. It’s causing me to react as if I’m under threat when I’m not.

This was one of those Eureka! moments. I realized I get angry when I drive because I expect to be angry. I feel threatened because I expect other drivers to put me in danger. This is different from just being aware of the situation and reacting to it. I’d been projecting my own filters onto the road around me and reacting when there was no actual danger to react to. Other drivers weren’t the problem, I was! Classic projection.

It took a worldwide pandemic and an empty intersection to show me that my road rage was entirely due to my own projected expectations. There are still honey badgers on the road, but I don’t have to get angry about it. It has also made me examine where else in my life I might be bringing unfair expectations to the party.

Now, I try to be “in the moment.” I’m really good at this when I’m journeying. I can go into the Otherworld understanding that there are dangers and ready to face them if I have to, but I’m not dragging a suitcase of fear with me to create problems that wouldn’t be there otherwise. For some reason, it has been harder for me to do this in the human world. Now, I have more self-awareness and it’s made me a happier and safer person on the road. And Tadhg doesn’t have to stress about sitting shotgun anymore!

(If you’re thinking, “Who is Tadhg?” then read this post.)

4 thoughts on “Road Rage in the time of Coronavirus”